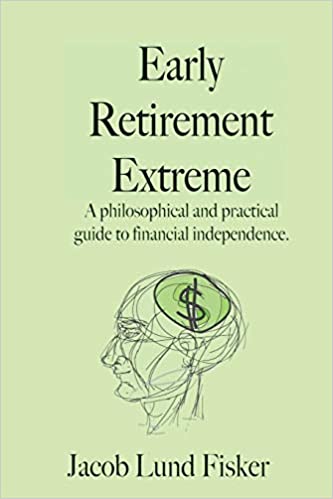 Buy it on Amazon

The book in 3 sentences

Who should read this book

If you want to understand the basic financial independence concepts, but don't want all the finance jargon, this book is for you. Jacob Fisker debunks and explains common beliefs about money. The latter part of the book offers practical and actionable tips to save money, but they might not be applicable or of interest to everyone.

How this book changed me

The book changed the way I think about retirement and spending. The joy of taking off time from work doesn't have to wait until you are a senior. In fact, you can retire in just five years if you make it your focus. Additionally, I have come to realize that it's worth spending $500 on a high-quality jacket that will last more than ten years, than to have to buy $50 jackets every second year because it follows the trend or the zipper broke for the old one.

Quotes from the text are in grey. My own interpretations and thoughts are in black.

Feynman once remarked that the best way to find new insights into a problem was to step out of the box, ignore previous publications, and come to your own conclusions.

People like to rely on past experiments and conclusions by others. But it's this trust of the past that prevents future discovery. If something hasn't been working, the solution isn't probing the problem with the same methods. It is either inventing a new process or trying something radically different. To live an extraordinary life, one cannot do ordinary things. Similarly, coming to original insight involves ignoring previous assumptions.

To live as a free person, following lists of easy, repetitive things, possibly in return for some reward, is exactly what should be avoided. Instead, it's necessary to understand how the world works and how people have been specialized to the point of general incompetence, like ants, which only know how to do one job, but do it very well; this is not human nature. To live well, one must go beyond lists and start thinking creatively about solving problems.

Creativity is part of human nature, yet the specialized world inhibits the use of this gift. Problems are approached with a rational, logical, and analytical views. They are probed with the same mindset that they were created. Finding solutions involves going beyond the traditional formulas and thinking in a broader scope, encompassing different fields of knowledge.

Directions are succinct and useful until you get lost or need to change your plans. Maps allow for optimization and freedom to choose your destination, but they require navigational skills.

Step-by-step frameworks dominate the education system, training courses, and the corporate world. They are easy. People create templates, post directions, and list rules. These can be useful. Someone with a list of commands has a simple and straight-forward way of getting from point A to point B. But what if they get lost? They never reach their target. People need to make maps instead of following instructions to understand the world around them and find the next move in any situation. Directions give you steps, but maps provide perspective.

Money is spent as a reward for the drudgery, but also because people perceive that there's nothing better to do with it.

People spend their weeks in the trenches of work, and in the weekends, spend it on "living." They spend money as a reward for themselves for enduring the hard, boring, or meaningless jobs. But what would happen if people shifted their mindset and found a career that they enjoyed? It wouldn't have to pay well, since people wouldn't try to find ways to escape from reality.

In a world where automation has eliminated pride in workmanship from the products and nobody has time for much else than work, status is based on acquisition and accumulation.

As computers replace human thinking, automation is exchanged for pride. Technology makes work easier and humans take less credit for the final product since they used less effort. It becomes difficult to show the finished product of one's work. Status is not based on workmanship anymore. It's based on extrinsic values. The brand of your shoes, size of your house, and make of your phone matter more than what you can do.

The real problem is not how much we earn; it's how much we waste, perhaps to demonstrate our supposed wealth, when we spend it. Anyone with access to rich resources has two choices: turn those resources into waste or turn them into wealth; that is, they can be consumers or producers.

The problem with being rich is not how low one's income is. It's how high their spending budget is. In a society where consumers outweigh producers, people find it hard to break out of the circle of spending. Anyone with money has two options: to turn it into assets, or to spend it. The culture of spending has cultivated people to waste their money on the effort of demonstrating wealth. Thus, most money goes down the drain. The first step to breaking out of the cycle, is understanding the reality of it.

How to become wealthy

A Renaissance man is a person who is competent in a wide range of fields, covering intellectual areas as well as the arts, physical fitness, and social accomplishments. Generalized skills allow a Renaissance man to reach creative solutions for most of his needs. Because of his ability to solve problems, the Renaissance man is fairly independent of the marketplace since he no longer has to buy nearly as much to satisfy his needs.

Nearly everyone is dependent on the market. Imagine if supermarkets, pizza places, or tech stores shut down. There would be uproar. The necessity of such businesses is beneficial, as people don't have to grow their food, sew their clothes, or communicate via foot. However, too much trust can also be costly. Most people cannot fix a leaky sink, mend a shirt, or cook a meal. As a result, they pay the price with high costs and reliance on others. A Renaissance man is someone who has a wide range of skills and interests. The variety of abilities allow the Renaissance man to solve problems independently and not buy as much to be able to support himself. Democratic states have a degree of independence. A Renaissance man is independent.

Strategy is a web of actions.

Linear functions are weak. Take away any point, and the line falls apart. However, a web is resilient and adaptive. The elimination of any object doesn't cause the collapse of the entire network, as it can still support itself from the positions of others. A good strategy is like a web of actions. If things go wrong, they can lean on other factors to deliver the desired outcome. Thus, it's more important to design a web of actions than to create a string of them.

Financial independence includes a strong vision of one day creating a metaphorical forest and living harmoniously with the forest.

You can only enjoy the abundance of a garden if you plant the seeds and provide the essential nutrients for plants to grow. Similarly, you can only enjoy the freedom of financial independence if you make smart decisions on where to put your money and continue to nurture it. Sustaining your money involves acquiring resources, creating value, and decomposing waste so that it fertilizes other assets. An investor is like a gardener. To reap the fruits of the garden, an investor has to plan and sow the seeds today. Only by projecting 60 years into the future can one take the steps today to get to the desired outcome.

Freedom is attained by creating a large gap between production (revenue) and consumption (expenses).

Most people are debtors. They borrow money so they can spend more of it. Generally, debtors have an earned income or steady cash flow that comes from work, a small savings account, and perhaps an emergency fund. Workers are people who consume less than their earned income. They save or invest the money after covering basic needs. Lastly, people who are financially independent invest in assets that generate income that covers spending costs.

Interested in reading more? Check out the entire book here.