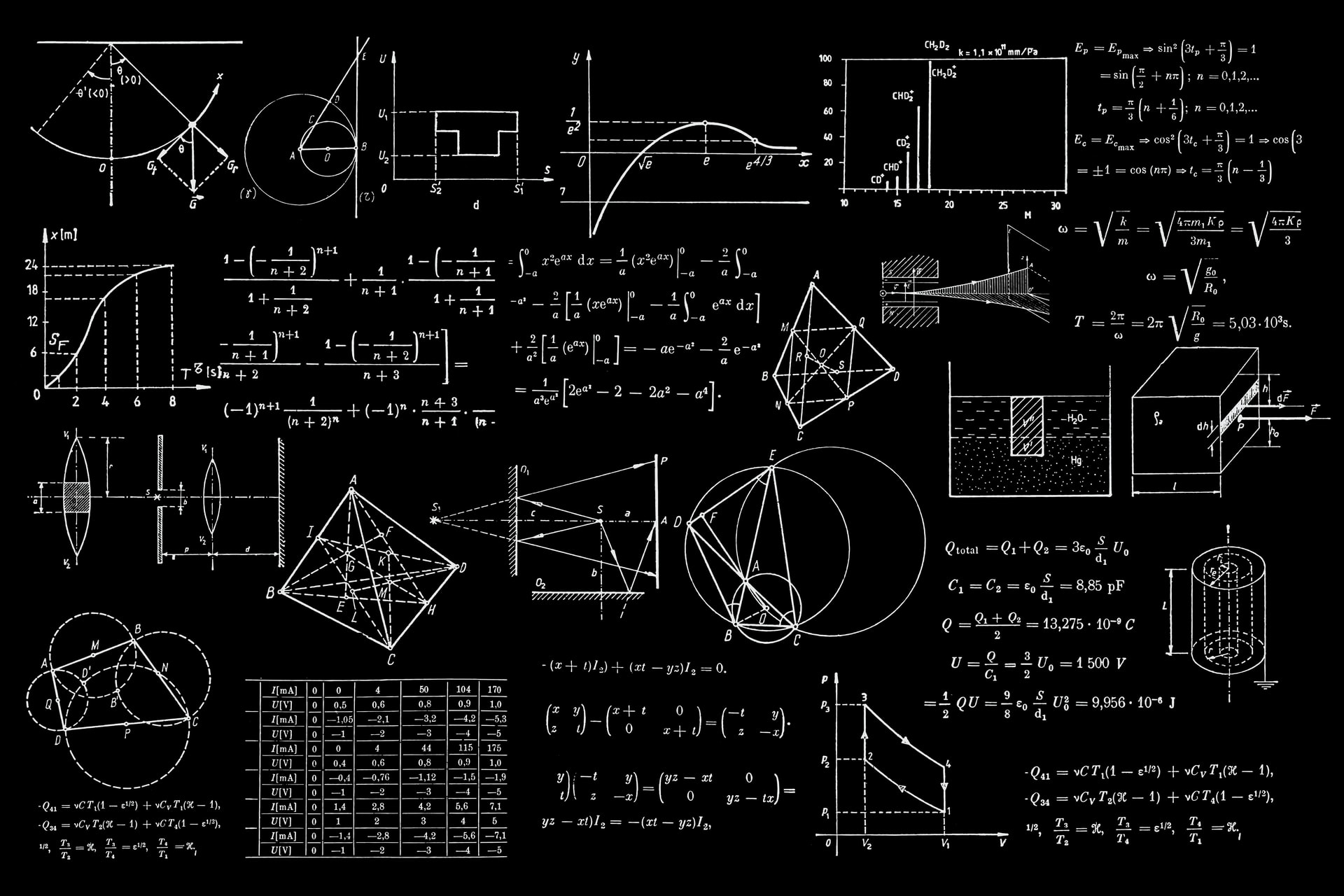 How Mathematical Representations Influence Our Understanding

I. The personal struggle

‍
This year is my first year heavily struggling with math. Although I never really fell in love with the subject, I became good at algorithmically applying step-by-step processes to problems and getting the right answer. But this year, with a college-level calculus course, things are different. I can no longer memorize and drill down a linear process to typical problems. Each problem poses a new way of testing your understanding of a concept, which means you can't just memorize. You need to understand the fundamental concepts and principles that govern calculus which is tough to do when alien notations conceal these principles.

Calculus is a broad field, and with so much curriculum to cover, I never developed a familiarity, a sensibility with this new language. It feels like being asked to fluently speak a language where I haven't even learned the alphabet. Each notation is code for parts of an imaginary graph, but I am never taught how to decode and visualize what is happening geometrically. Blindly, I shuffle symbols and integrals left to right. As David Hestenes and Garret Sobczyk wrote, "Geometry without algebra is dumb! Algebra without geometry is blind!"

It's not just me who struggles. Most of my class does too. But there are a few students who seem to get it. As soon as we cover a new concept, a different abstraction, it makes perfect sense to these calculus whizzes. It seems like in each new lesson, the teacher gives out a puzzle piece representing an atomic block of calculus. I happen to get a blank puzzle piece.

During the lesson, the teacher shows me where to place the piece in the puzzle and how the edges and curves line up to other topics we've learned. But the calculus whizzes receive puzzle pieces that have parts of a bigger picture on them. When the teacher tells them where to place it, it makes sense because it perfectly fits into the larger image they've been constructing. Over time, it becomes easier for these students to make sense of concepts because a picture starts to unfold, and it becomes easier to place new puzzle pieces into the picture. While they are filling out their image, I have a completely grey puzzle with no bigger image to guide me.

The star students develop a general idea of calculus and easily add new pieces on their own while I am left struggling in a sea of blank pieces. Nothing makes sense of how the pieces connect besides a logical progression and advancement of the material.

So, of course, I had to figure out why I couldn't see the bigger picture.

II. Most mathematicians don't think in symbols and formulas

‍
I decided to understand the thought processes of mathematicians. Surely they were seeing something I wasn't.

Most mathematicians don't even think about math in symbols, formulas, or proofs! They often use "hidden representations," such as mental pictures and their own notations and definitions to solve problems. Richard Feynman, the famous physicist and teacher was known to make his symbols fit his way of thinking:

"While I was doing all this trigonometry, I didn't like the symbols for sine, cosine, tangent, and so on. To me, "sin f" looked like s times i times n times f! So I invented another symbol, like a square root sign, that was a sigma with a long arm sticking out of it, and I put the f underneath. For the tangent it was a tau with the top of the tau extended, and for the cosine I made a kind of gamma, but it looked a little bit like the square root sign. Now the inverse sine was the same sigma, but left-to-right reflected so that it started with the horizontal line with the value underneath, and then the sigma. That was the inverse sine, NOT sink f--that was crazy! They had that in books! To me, sin_i meant i/sine, the reciprocal. So my symbols were better." ––– Richard Feynman, Surely You're Joking Mr. Feynman

Mathematicians have unpublished thought processes which guide their work and are only understood by others working in their subfield.

"People familiar with ways of doing things in a subﬁeld recognize various patterns of statements or formulas as idioms or circumlocution for certain concepts or mental images. But to people not already familiar with what’s going on the same patterns are not very illuminating; they are often even misleading. The language is not alive except to those who use it." –– William Thurston

Visual and spatial thinking is important to understand concepts, but most of these figures live in a mathematician's head instead of books and papers. When publishing their findings, mathematicians try to encode their multimedia thinking into universal symbols and language. The readers then try to decode this message into models and visuals they can understand. We waste tremendous effort and time transcribing and translating concepts to achieve understanding.

Besides visual and spatial thinking, mathematicians rely on metaphors, associations, and intuition to simplify complex ideas.

Metaphors are similar to symbols as both package complex ideas into concrete relationships. However, metaphors create bridges from new concepts to familiar ones. Meanwhile, notations take complex and concrete examples and tie them into abstract forms.

"Humans actually codify most of their knowledge not in terms of mathematical tables, sets of statistics and scientific laws, but in terms of metaphors." –– Brian Eno

Mathematicians are metaphor makers. They invent new ways to see the world. Unfortunately, the current methods of expressing these insights and associations are not good enough. Like artists who have multiple mediums to express their creations, mathematicians also need various ways of representing knowledge that goes beyond text and notation.

III. There are many ways to understand concepts

‍
Each person has different ways of understanding and thinking, which is usually not linear like a textbook might encourage. Part of what makes mathematics beautiful is the elegance of a succinct proof, a surprising way of reaching a solution or using describing something with unrelated concepts.

"The derivative can be thought of as:

(4) Geometric: the derivative is the slope of a line tangent to the graph of the function, if the graph has a tangent.

(6) Approximation: The derivative of a function is the best linear approximation to the function near a point.

(7) Microscopic: The derivative of a function is the limit of what you get by looking at it under a microscope of higher and higher power."

As he says, "one person's clear mental image is another person's intimidation." Often, we are only shown one linear process to solve a problem. But for higher-level mathematics, it is not enough to know the step-by-step procedure for solving one categorical type of problem. Students need to cultivate creative thinking and develop a lust for discovery and personal insight.

"[...] the essence of math resides in its freedom, in the freedom to create." ––– Gregory Chaitin, Metamath

There has been some attempt to reform dry textbooks with animated graphics and simulations, which certainly help. I started to think of derivatives and integration in an entirely new way when I watched this series on the essence of calculus. Chalktalk is an animation software developed by New York University's Future Reality Lab and Apparatus is a program where you can make interactive diagrams. Hopefully, these tools can infuse play into mathematics, something that I think is much needed. Like an artist who plays with colors, shapes, and light, a mathematician plays with numbers, graphs, and geometry.

IV. A new interface for mathematics

“We could, of course, use any notation we want; do not laugh at notations; invent them, they are powerful. In fact, mathematics is, to a large extent, invention of better notations.” ––– Richard Feynman

As I've stressed before, our interfaces for learning and doing mathematics are not good enough to handle visual and spatial communication.

Textbooks are so formal. Feynman says they are "a perfect case of introducing words without introducing ideas."

What if we developed new tools for mathematics? Perhaps something that would allow us to see the geometric counterpart of algebraic manipulation and vice versa. The imagination of abstract problems wouldn't be left to the student. As Bret Victor, a computer scientist and programmer writes, we need " dynamic graphs, diagrams, visual models, and visual effects should provide visceral representations. Relationships between values, exponential blow-ups and negligible terms, should be plainly seen, not imagined." Math defines our worldview. The invention of the telescope greatly helped Galileo advance mathematics. His discoveries in astronomy and gravity opened up new mathematical concepts. His tools were essential to influencing math.

My question aimed to understand how some students seem to get calculus while others don't. I believed I wasn't smart enough or just too tired to absorb everything during a class. What I found through this essay, is that those few calculus whizzes have a way of thinking which directly matches the way information is taught. And most of the time, this thinking process is shaped by prior experiences. For instance, my friend spent years enrolled in a math and reading program called Kumon. She said that Kumon was influential in shaping her thinking and problem-solving process.

My way of thinking is much more visual and grounded in the concrete. And that's okay. I need different perspectives and different tools besides symbols and numbers.  I believe the cultivation of these tools will open the locked gates of mathematics to much more people who will use these tools to advance further advance mathematics. Most of all, I hope even the average person will appreciate the beauty of mathematics.

"[The universe] cannot be read until we have learnt the language and become familiar with the characters in which it is written. It is written in mathematical language, and the letters are triangles, circles and other geometrical figures, without which means it is humanly impossible to comprehend a single word." –– Galileo Galilei

How To Get The Most Out Of Your Environment