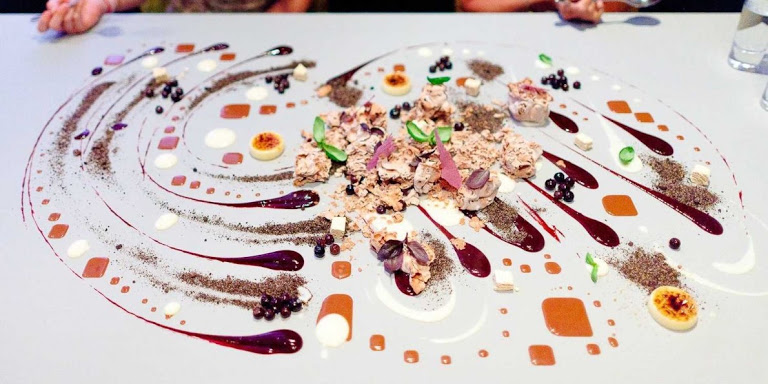 Once on Chef's Table, chef Grant Achatz and his team asked, "What is a tomato?" Off-hand, one might say it's a spherical red vegetable. There is nothing special about it. But from this one question, the team brainstormed a page full of ingredients. They built shapes and combined textures that made a tomato look like a strawberry and a strawberry look like a tomato. This questioning is the essence of Alinea, a three Michelin star restaurant in Chicago. Run by Grant Achatz, the restaurant delivers emotion, surprise, and wonder to the dinner table.
‍

After all, how many chefs have succeeded in serving burning oak leaves as part of a dish? Or created food that floats on a pillow with tiny holes that release fragrances while diners eat? Only Achatz. In his chair, he jots down a dish title with ingredients and ways to manipulate them to a particular taste. He could taste it in his brain without sampling it with his mouth.
‍

This is an essential skill, as he had stage IV tongue cancer and received radiation that burned his taste buds off and caused the inside of his mouth to peel. When first confronted with cancer, doctors said they would have to remove at least 70% of his tongue. It was surgery or death in a month. But, he found a clinical trial at the University of Chicago. He was given a 12-week chemotherapy treatment and six weeks of radiation. He couldn't eat solid foods because the radiation nearly swelled his throat shut. He even had to wear a burn mask because of the damage to his skin. After his treatments, surgeons removed the lymph nodes on his neck. They did a biopsy on them, and there was no cancer left. Achatz went through all of this and only missed 14 days at the kitchen in Alinea.
‍

Slowly, the flavors started coming back. The first flavor was sweetness. Achatz experienced taste like a newborn, but as an adult. He said this experience made him a better chef because he could understand the synergies of flavor. He could appreciate the extremes and depths of combining chocolate with soy sauce and burnt bread with chestnut puree.
‍

Novelty is what he and Alinea stand for.
‍

"What makes the food that we do at Alinea so interesting on the outside is that we really don't let ourselves say no to an idea," Achatz says. "When we start looking at things really critically or even very simply, we realize that there's more than one way to actually get the same results ... You're deconstructing the components of a course and putting them back together."
‍

From Achatz's palate to the molecular structures of ingredients, learning requires breaking things down to build them back up. Breaking something down into its elemental parts lets you understand the rules that govern a field. When Achatz was recovering from his illness, he relearned the fundamentals. By playing with the basic tastes of sweet and salty, he could balance the two and create a dish that held beauty in its complexity.
‍

Boil down a skill or subject into the core principles or keywords. Then create something from them. Make knowledge your own instead of an imitation.  Understand the basic rules, but then remix them into something revolutionary.

Startupism: The Ideology that Runs the Business World

8 Ways to Hack Your Day